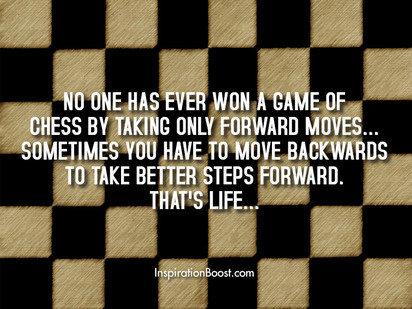 We must make mistakes in order to grow and move forward. For all of us, this is an experience we can relate to and not escape. I have taken many steps backwards in my life and only moved forward when I became more aware and connected with myself. Chess has the ability to connect many things for children, especially At-Risk children. The following examples continue to demonstrate the power that Chess can have on those that are exposed to it and how it's helping to save their and even the lives of others!
I find the following true story an excellent example of just one of the ways Chess can help to save lives! Most of all, I appreciate the way it starts!

"Let me start by saying that chess saves lives. I can testify to this personally, as an R&D technologist/computer nerd in a large hospital. A year ago I came up with the idea of a computer system to detect "discrepancies" in patient care. A few months after getting the system running, it alerted us to a two-year old girl whose therapy appeared to have been discontinued too early. The doctor, when contacted, went berserk. The medicine had been stopped by accident, and had the computer not noticed it, the child could have died in hours. The incident brought my superiors to my lab, and after seeing how the system worked, one commented, without prompting, "Only a chess player could have built this."

My boss based this on what most non-players think of when they think of chess, the if-then type of analysis. In fact, the truth of his statement went much deeper. Building the system required taking other's expertise and synthesizing it into something I could use, much like devising an opening system based on GM level books. I actually found myself asking doctors and pharmacists the same questions I asked of opponents in post game-analysis: "Tell me, why did you do this? What was your reasoning for that?" On a still deeper level, the very concept of the system was chess-like, in that it utilized a very minimal advantage (computers don't get bored looking at tons of data waiting for rare mistakes) and like a single pawn, pushed it over the long haul, and queened it." Robert Morrell

The video above is concerned with a program called Chess for Success and is run by a gentleman by the name of Phillip Margolin.
Mr. Margolin struggled in school like many of the children we are attempting to help today until he found Chess...

"As a child, Phil says he was a terrible student with low self-esteem and a short attention span. He was bringing home C’s, D’s and the occasional F, which resulted in his being placed in a class for slow learners. In the 7th grade, Phil became fascinated with chess and began to learn that in order to succeed you must move slowly and think methodically. When Phil started winning against his teachers, his confidence went up and so did his grades. He began looking at school the same way he looked at Chess, and he started to excel." Phil later became a lawyer and New York Times best-selling author.
The video below demonstrates the power that Chess can have on
children's lives in Philadelphia.
It's easy to recognize the benefits children can reap from Chess,
especially if you can catch them early.
In the above video, Phiona Mutesi shows us that she is an inspiration not only to the world of Chess, but also to the human spirit that lives in each of us. A young woman such as this that has risen above the cruelty and poverty of her environment utilizing Chess. In my humble opinion, I think it's safe to express that Chess directly helped with "Saving her Life."